I find the term “Belief in Evolution” rather strange considering evolution is science rather than faith based, but I suppose there are people who don’t believe in science – at least not when it conflict with their belief system. I suppose that makes it cafeteria-scientific belief or some odd thing.

RJ Eskow took at look at this over on the Huffington Post, and included the following chart showing the percentage of scientific believers by country: 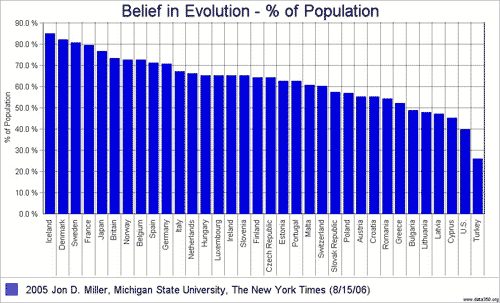 You’re find a larger version of the graph with the post here.

“Our awareness of this scientific reality has actually gone down over the past 20 years, no doubt as a result of the so-called “intelligent design” movement and other Christian fundamentalist campaigns. In fact, frequent churchgoers in the US are most likely to doubt evolution. How will their children – and ours – become the great scientists, doctors, and engineers of tomorrow?“

The answer is simple: they won’t. People who don’t believe in science will never be great scientists. It’s simply not possible. Just like people who believe they’re invincible tend to live short lives.

One thought on ““Belief” in Evolution? Not so much in the USA”